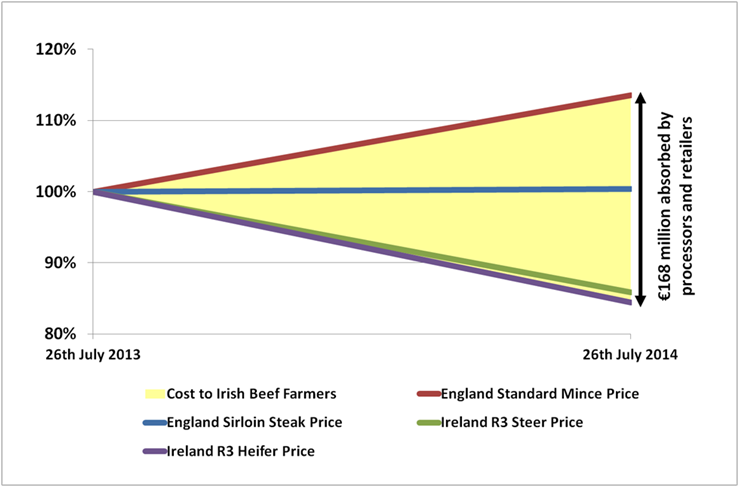 Successive price cutting by meat factories over the past 12 months has cost Irish beef farmers a cumulative €168 million according to an ICSA analysis. This analysis is based on the premise that there has been no justification for severe price cuts given that retail prices for beef in our most important market – England – have actually increased over the same period. Moreover, the purchasing power of UK retailers has actually increased, as it now only requires 79 pence sterling to buy a euro worth of goods compared with 87p this time last year.

ICSA president Patrick Kent has claimed that this really blows the lid off claims that Quality Assurance Schemes are benefiting farmers. “How can farmers have any faith in being forced to go the further mile in quality assurance when we see the rip-off being perpetuated on farmers over the past twelve months? Retailers and processors have absolutely abused a slight increase in supply to drive farmers close to the brink of bankruptcy while the consumer in England is actually paying more today than twelve months ago.” Table A illustrates the increase in retail prices for the main beef cuts in England over the past twelve months notably the 14% increase for popular cuts such as mince, while even the more expensive cuts are holding their own or are marginally higher.

Mr Kent also expressed astonishment that the Irish government seems to have adopted a relaxed approach to what’s going on. “Our analysis really means that it will not be possible for the Government to wash their hands any further when it comes to the rip- off of farmers. Apart from the loss to farmers, there are knock-on losses to local rural economies in every county in Ireland as farmers’ purchasing power declines substantially.”

“However, the Government really needs to wake up to the fact that this actually involves a re-appropriation of capital out of the Irish economy and into the hands of multinational UK-based retailers. Given that UK consumers are paying more now than twelve months ago, the cut of €168 million suffered by farmers has obviously been shared out between processors and retailers.

Due to the failure to look at any form of retail chain regulation or monitoring, we can only guess who gets what. One thing however is clear which is that there is substantial economic loss to rural communities and the wider Irish economy and a substantial gain for UK retailers. Is it over-stating the case to say that Ireland’s economic interests are being sabotaged while the Government stands by?

It is now clear that lectures about how important the Quality Assurance Scheme is to the national interest need to be re-evaluated. The problem is twofold: first, the QAS is benefiting processors and retailers far more than farmers and second, the scheme has been manipulated as part of a strategy to drive down prices and remove competition from mart ringsides.

While the meat industry might argue that farm gate prices to GB farmers have also declined and that excess supply always leads to lower prices in all markets, the fact is that success in driving down Irish farmgate price has been the pre-cursor to hammering British farmers who have also seen their price decline, despite supplies remaining tight across the UK as a whole.”

ICSA has been arguing for the need for Government and EU intervention to monitor and regulate the retail chain for primary products such as meat. It is also calling on farmers, farm organisations and marts to take a more critical approach to why they should continue to co-operate with QAS when it is clear that beef processors and retailers couldn’t care less about farm viability. “The publication of the Teagasc National Farm Survey figures last week really separates myth from reality, showing suckler and beef farmers losing €120-130/ha from their farming operations in 2013. It really is time to shout stop and ICSA expects that all who support cattle farmers will support us on this,” concluded Mr Kent.


Table B : Deadweight prices for R3 Steers & Heifers in Ireland


This can be graphically represented using the approach in the chart below.