CAP FUNDING PROPOSALS SHOWS GOVERNMENT OUT OF TOUCH WITH REALITY 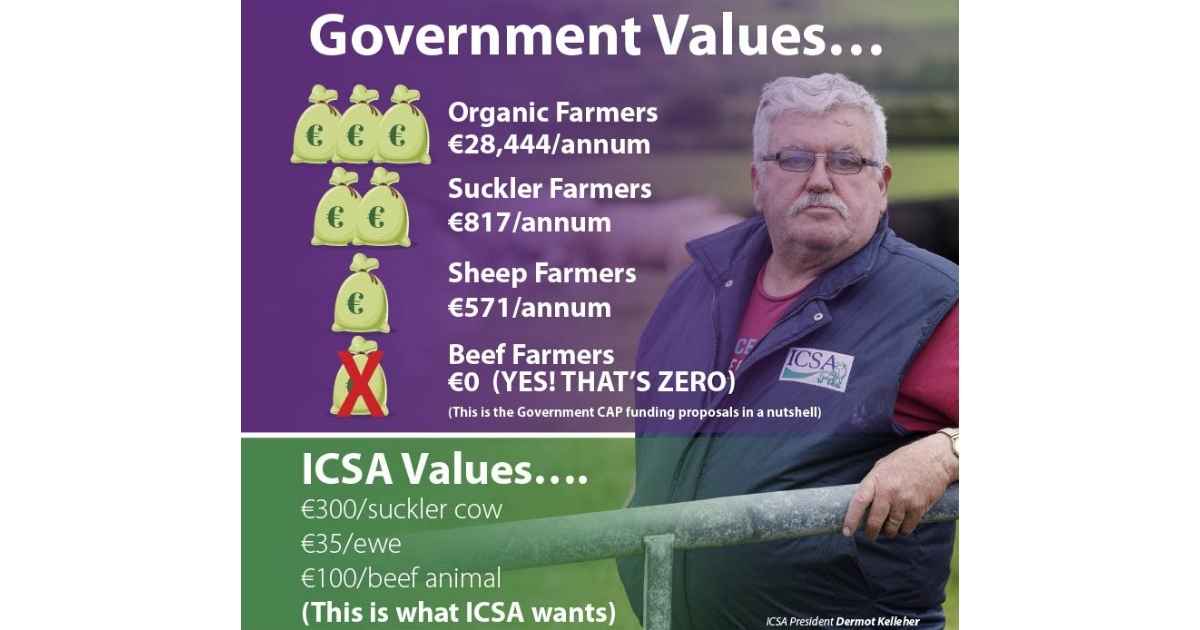 ICSA president Dermot Kelleher has said that the proposed allocation of CAP funds suggests that government officials are completely out of touch with reality. “It makes no sense whatsoever to allocate €256 million to the organic farming scheme, just marginally less than the €260 million for sucklers and substantially more than the €100 million allocated for the sheep scheme. It’s not that we are against more ambition for the organic sector. But you would have to be on another planet to think this is balanced when there are currently just 1,800 organic scheme participants. Meanwhile, the 63,600 farmers in sucklers look on in amazement and are coming to terms with the fact that they are being allocated less than the current combined allocation under BDGP and BEEP.”

ICSA has calculated that the Department plans for the different sectors work out as follows:

“It is now clear that the ICSA plan needs to be looked at very closely, not only by the Minister but also by other farm organisations. In particular, the ICSA proposal to use 13% of Pillar 1 for coupled payments must be implemented. This will add at least €120/cow to support sucklers and €16/ewe to support sheep. This would make all the difference because it is clear that the proposed sheep scheme and suckler carbon scheme in Pillar 2 are woefully inadequate.”

“ICSA is also calling on the Minister to reserve up to €60 million from the Pillar 2 budget for a beef finishers payment of €100/head, targeted at those who finish cattle at a younger age, and which could deliver a lot more on the climate change targets than all the other measures put together.  This has already been acknowledged in the national ag-climatise strategy.”

ICSA organic chair Fergal Byrne is adamant that ICSA is in favour of organic farming. “However, it is cloud-cuckoo-land to think that the way forward is to massively over-fund the scheme when key issues curtailing the growth of the organic sector have not been addressed.”

“First, it is pointless expecting people to switch to organics when there is no coherent plan to market substantially increased exports. Bord Bia is not focused on organics, and worse, the key meat processors have done absolutely nothing to develop our organic beef and lamb exports.

It is also pointless expecting to find 6,500 new organic farmers to reach 7.5% of land under organics when Teagasc does not have sufficient resources allocated to organic research, training and advice.

Finally, we need to revisit the restrictions on housing organic cattle on slats because most farmers cannot switch to organics given the scarcity of straw and the potential massive costs in converting yards to suit the organic scheme.”