ICSA pre-Budget submission: Agriculture must be supported as a key element of economic recovery

•    Suckler Cow Welfare Scheme must continue in its entirety and remain fully funded
•    Installation aid fund of €10 million must be established immediately for trained, young farmers
•    Carbon tax & excise duties hurting agriculture & must be reviewed
•    Vital DAS must not be cut
•    50% stock relief must be available to all farmers

The Irish Cattle and Sheep Farmers’ Association has launched its pre-Budget submission, calling for funding to support young farmers, an immediate suspension of the carbon tax and a continuation of the vital Suckler Cow Welfare Scheme.
The document – Ireland’s Agriculture: A Key Part of our Economic Recovery – outlines the crucial role of agri-business in the effort to reverse the downturn, and highlights a number of key points necessary for progress both nationally and within the farming sector.  In it, ICSA warns that in the absence of the ability to provide fiscal stimulus, the Government must strive to ‘do no harm’ to the industry.

Commenting on the recommendations within the document, ICSA president Gabriel Gilmartin highlighted the organisation’s key concerns for Budget 2013.  “Within the confines of the Croke Park Agreement, the Government has been largely focussed on reducing public sector staff numbers, rather that tackling pay.  There is therefore a disproportionate level of cuts being made to vital schemes, including farming schemes, frontline services and capital investment.  This is unsustainable and the Government must tackle increments and allowances in the public sector.  Farmers could rightly argue that payments such as DAS and REPS form part of their ‘core pay’, but it would fall on deaf ears.  There is an issue of fairness here and both Ministers in the Department of Finance must face up to it.”

Mr. Gilmartin said taxation is a major issue and caution is needed, particularly with capital taxes.  “For example, given the increase in the rate and lowering of the threshold for CAT in Budget 2012, there is no room for any further increases in Capital Acquisitions Tax.  Farm development and viability could be undermined and that would be incredibly counter-productive in the long run, in terms of export targets.  With regard to Capital Gains Tax, we are calling for the reversal of the measure contained in Budget 2012 which introduced an upper limit of €3 million for CGT retirement relief, where the farmer handing transferring farm land and assets is aged over 66.  ICSA sees this as a rather bizarre move and does not reflect the reality that while early transfer is desirable in certain circumstance, it is not always possible.”

“We are also hugely concerned that the taxes on fuel are damaging to the sector.  “Anecdotally, the high excise duty and the carbon tax combined are leading to curtailed fuel usage and the purchase of fuel outside of Ireland, which is bad news for the Exchequer.  What we are saying is that the Minister should seriously consider reducing excise duty on fuel and suspending the carbon tax for a year to see what effect it has on the Exchequer.”

Mr. Gilmartin said the setting up of a €10 million installation aid fund to support trained young farmers is badly needed.  “The targets for Food Harvest 2020 are ambitious.  We will need to support and encourage young farmers in order to achieve the levels of production envisaged in the report.  It is also extremely important that the Suckler Cow Welfare Scheme and DAS are protected from cuts, because their importance to many livestock farmers cannot be overstated.  Also, the new AEOS needs to be such that it has the scope to allow the maximum number of farmers leaving REPS to enter it.”

“The fact is that the Department of Agriculture has, as we see it, already made a huge effort in expenditure cuts.  In addition, we would urge the Government not to lose sight of the fact that the farming sector, as an export-orientated industry driving a significant part of our economic recovery, must be nurtured rather than hindered.  We accept that the ideal scenario of a fiscal stimulus for the sector is not possible.  That being the case, we are calling for the Goverment to ‘do no harm’ and avoid imposing further contraction on farming,” Mr. Gilmartin concluded. 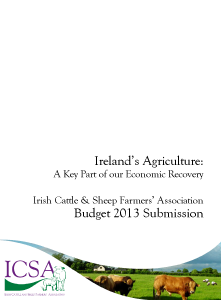