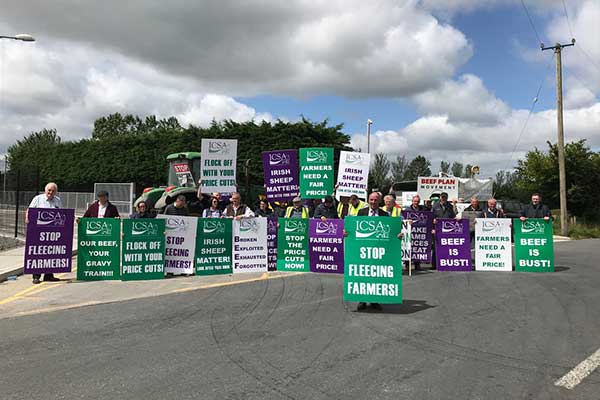 The ICSA sheep committee held a protest today (Monday) at the Department of Agriculture headquarters to reflect growing anger among sheep farmers about EID tagging, as well as the clean sheep policy. ICSA sheep chairman John Brooks said that the Minister’s unilateral decision to impose mandatory electronic tags (EID) on lambs destined for factories was the straw that broke the camel’s back.

“There is neither rhyme nor reason to the Minister’s decision to impose mandatory electronic tagging on lambs going direct to the factory. The traceability requirement is that they are tagged before they leave the farm. A few hours later, the lamb is processed with the ear disposed of and the costly electronic ear tag is in the skip.

The Minister talks about new markets but the reality is that the vast majority of our lamb will continue to go to EU markets which are under-supplied. There is no need to add cost to our lamb for existing markets and the reality is that in the biggest EU market – France – lamb imports will always be discounted compared to native French lamb regardless of what we put in lambs’ ears.

The main marketing logic was allegedly for the US market but this won’t be the first Minister to talk up the potential of the US market in vain. If we can’t make inroads there with grass fed beef, we are highly unlikely to fare much better with sheepmeat.

This decision will add some €2.5 million cost to sheep farmers, based on additional costs of €1/lamb and a throughput of some 2.5 million lambs/ annum. However, the average profit per lamb is about €14, based on an annual average price of €100 or €4.80/kg over the past five years.  It costs the average Teagasc profit monitor farmer €86 to produce a lamb. So when the Minister adds €1 cost to a lamb producing €14 profit, he is imposing a 7% income cut. This compares badly with EU proposals to cut CAP direct payments by 4%.”

Mr Brooks added that the proposal for a one-off payment of €50 was really rubbing farmers up the wrong way. “Does the Minister really believe we can be bought off for €50? You’d give it to a youngster for their holy communion but it doesn’t make up for a permanently imposed cost leading to a 7% cut in sheep farmers’ profits. That’s on lowland farms. The situation is even worse for hill farmers who are being asked to fund an extra euro when selling store lambs from the hills that might only be worth €20-30.”

The protest is also on the back of farmer anger over the clean sheep policy which has been imposed without any concern for the problems it has caused in factories this year. “We need an urgent review of the implementation of the policy as we cannot allow a repeat of the chaos we have seen on occasion in factories with whole consignments of lambs being sent off for shearing. It is incumbent on the Department to pull all stakeholders together to develop a consensus on what will work in practice. It is especially important  that Teagasc develop and trial  systems of production that will ensure farmers can comply with requirements. Farmers need certainty and there is a lot of anger about the lottery of sending lambs in to a factory not knowing what will happen to them.”

ICSA wants an urgent meeting with the Minister and the association is insisting that it’s back to the drawing board for compulsory EID for lambs and for the clean sheep policy.