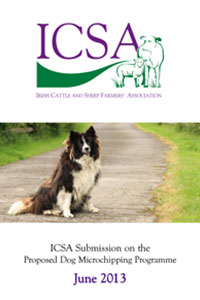 Minister Coveney recently made a call for submissions on Dog Microchipping as part of the passing of the Animal Helath and Welfare Bill into law; he specifically plans to introduce a regulation which will require the microchipping of all dogs in the country.

ICSA has been calling for such compulsory microchipping for many years, and has strongly welcomed the Minister’s proposal as a solution to many of the current problems relating to Ireland’s dog population such as straying, rehoming, theft, livestock worrying, animal cruelty and dangerous dogs. This submission makes a number of recommendations relating to the implementation of microchipping, including:

ICSA aim to play an active role in any publicity campaign during the microchipping rollout.