Pics from today’s ICSA protest on Mercosur and TTIP

ICSA protest against the Mercosur and TTIP trade deals.

The Irish Cattle and Sheep Farmers’ Association (ICSA) is protesting outside the EU Commissionoffices today due to the potential sell-out of the EU beef farming sector in Mercosur and TTIP talks.

ICSA President Patrick Kent slammed EU Commissioner for Trade Cecilia Malmstrom forreckless concessions and claimed that the EU Commission has no democratic mandate to push for a trade deal at such a huge cost to the European beef farming sector.

“ICSA is particularly alarmed at the proposed concession of a 78,000t tariff rate quota (TRQ) in the Mercosur talks and the possibility of a similar offer on TTIP. All of this comes after the concession of 50,000t to Canadian farmers under CETA.

ICSA is outraged that the Commissioner for Trade seems to have taken too many steps without a proper mandate from the member states, without proper scrutiny by the members of the European Parliament and without a full analysis of the cumulative impact of multiple trade deals. 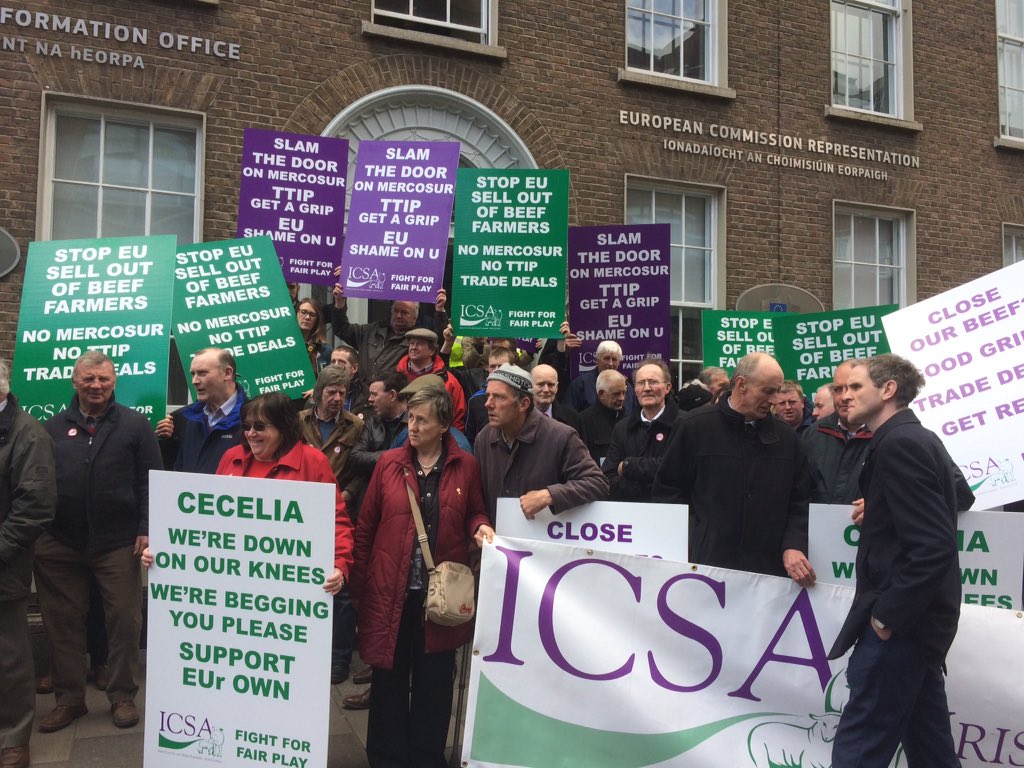 “It is not good enough to analyse these deals in isolation. The impact on EU beef farmers must be assessed on the basis of the aggregate importation of ultra-cheap beef from both North and South America.”

Kent pointed out that it was utterly unfair to provide free access to EU markets to external producers who do not have the same burden of cross compliance and regulation endured by European farmers. He added that these trade deals undermined EU climate change objective.

“ICSA is demanding that the EU Commission rows back from getting a deal at the expense of the EU beef sector. Beef is a sensitive product that cannot withstand the effects of the proposed TRQ concessions in Mercosur or any potential similar concessions under TTIP.

ICSA is also calling on the incoming government to take a very strong stance on these negotiations and to join the French government in rejecting the undermining of EU agriculture.