ICSA president Edmond Phelan has called on Minister McConalogue to insist on monthly meetings of the Beef Taskforce with a view to progressing the appointment of a regulator and the delivery of all the other commitments made under the beef agreement. This was one of the key demands set out by ICSA at today’s meeting with the Minister.

“ICSA stressed the need for the Minister to inject a sense of urgency into the Beef Taskforce. We made it clear that strong and robust regulation in the sector is long overdue. The Taskforce needs to bring about total transparency in the beef food chain and must ensure that neither processor nor retailer can abuse their dominant positions. A regulator with real powers to investigate what goes on along the entire food chain must be made a reality.”

“ICSA urged Minister McConalogue to immediately take ownership of the TB Forum as the current breakdown in policy between farmers and officials has the potential to derail the entire TB Eradication Programme.”

“We have called on the Minister to establish a Sheep Taskforce to ensure that sector gets the focus it deserves. There are inadequate supports through the Sheep Welfare Scheme, there is a lack of transparency around sheep imports, and there has been a complete collapse of wool prices.”

“Further, ICSA urged the Minister to reconsider the Department’s support for EU Protected Geographical Indication (PGI) status for grass fed beef. We believe the current position of looking for PGI status for all beef is the wrong approach as it would do nothing to ensure the viability of the struggling suckler sector. ICSA is adamant suckler beef must be developed and promoted as a unique high value product and as such should be prioritised in any application for PGI status.”

ICSA sought a commitment from Minister McConalogue to push for additional exchequer funds for the farming sector. “ICSA has calculated that an annual budget of €750m, or three times the current GLAS budget, is required to roll out an effective new REPS type scheme. It is clear exchequer funding, on top of CAP, will be required if we are genuine about playing our part in the EU Biodiversity and Farm to Fork strategies, getting real results, and rewarding farmers for their role. ICSA believes that the next CAP must deliver maximum payments to farmers in the cattle, sheep and tillage sectors who are most dependent on it.”

Concluding Mr Phelan said, “Brexit and CAP reform remain critical in determining the future for Irish farming. However, it is essential that economic sustainability is delivered to Irish drystock farmers and ICSA looks forward to working closely with Minister McConalogue.” 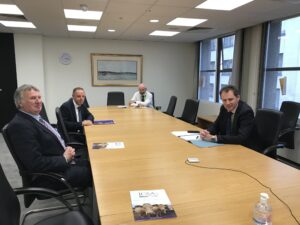