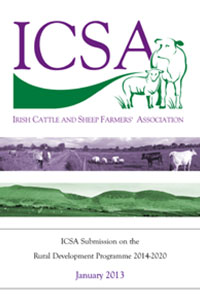 ICSA has made a submission in January 2013 to the Department of Agriculture, Fisheries and Food in response to the 2014 – 2020 Rural Development Programme consultation call. Following ongoing discussions, a number of revisions were made, leading to an updated submission being put forward in July 2013.

In the context of the ongoing respective EU budget and CAP reform negotiations, ICSA argues that a Rural Development Programme needs funding of up to €700m per annum in order to make a real impact in terms of meeting the six key objectives set out by the EU Commission in its CAP reform proposals.

Furthermore, as part of any new RDP, ICSA has advocated the following measures: